What exactly is the way forward in Zimbabwe?? Please Zimbos lets discuss! hosted by zimfinalpush.

Chat about what's on your mind. More about public chats.

WATCH THE ARCHBISHOP OF YORK CUTTING UP HIS CLERICAL COLLAR!

NB: THIS IS NOT THE HOME PAGE! 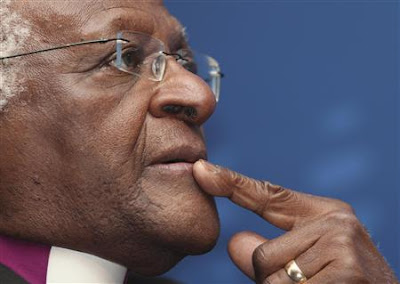 By David Clarke
LONDON (Reuters) - South African Nobel peace prize laureate Desmond Tutu said on Wednesday Zimbabwean President Robert Mugabe needed face-saving options for there to be a chance of him stepping aside.
Tutu said the replacement of Tony Blair by Gordon Brown as prime minister of Britain, Zimbabwe's former colonial ruler, could help the situation but much depended on negotiations to resolve the crisis being mediated by South Africa.
"A change of cast might have an important bearing on how things develop," Tutu told Reuters in an interview.
"I would hope that there might just be a way of providing face savers that would enable people to exit without feeling that they had lost a great deal of personal stature," he said.
"We need to provide that for the sake of the people and it may be that (Britain's) new prime minister just might have a way of saying things that would be slightly more acceptable."
Relations between Britain and Zimbabwe have reached a low. Mugabe, 83 and in power since independence in 1980, has accused Britain of trying to overthrow him and he threatened on Wednesday to seize foreign companies.
Britain has criticised Mugabe for his crackdown on the opposition Movement for Democratic Change and accused him of driving the southern African state to economic ruin.
Tutu, who has been an outspoken critic of human rights violations by Mugabe's government, was not specific about the kind of face savers that might work.
He said: "I think they have to go and speak with the actors but it is finding a way of letting him maybe step down in a way that still leaves him with some dignity and self respect."
While Western nations have called for a tough African response to end the crisis, the Southern African Development Community (SADC) has plotted its own diplomatic course, calling for more dialogue and an end to Western sanctions.
"(South African) President (Thabo) Mbeki is the facilitator, the mediator, appointed by SADC and he's had some of (the Zimbabweans) come to Pretoria and they've had exchanges," said Tutu.
"I have been told on very good authority that I think the two sides set themselves June 30 as the deadline for something significant," he said.
"It's a delicate thing and you are constantly having to determine whether it is better to keep quiet for a while so that you don't muddy the waters.
"And so much hinges on how President Mugabe reacts and then you know that the fate of many, many, many hangs on how he operates. So I wouldn't want to jeopardise the whole thing. Let's wait."